We have a question at hand: is it ‘udderly’ irrelevant? Maybe. Is discussing this a load of ‘bull’s**t? Quite possibly. But nonetheless, I choose to ask it.  Why does the iconic Nickelodeon character Otis, the male-identified cow of the movie and TV franchise Barnyard, have udders? There are other bulls in the movie that don’t, but for some reason, Otis strays from the norm.

There’s a surprising amount to unpack when discussing this topic, but at the very least, we’ll ‘graze’ the surface of it. Although this question about a 2008 cartoon character may seem trivial, the juxtaposition of logic and design choice made here lends itself well to discussing the larger implications of why artists may choose to make certain design choices. (And although I do love ‘milking’ them for all they’re worth, I promise there will be no more cow puns in this piece.)

There are three major theories that should be considered when discussing the subject of the udders, but the most obvious to dissect is the argument for aesthetics. Indeed, the image of a cow is one that is readily identified by people of all ages, and can be identified as a regular barnyard animal as soon as a child learns the first verse to Old McDonald. A cow, in a sense, has a certain cultural capital that a bull does not. As such, the designers of Otis may have simply chosen to create a cow main character because it felt or looked right in relation to the plot and aesthetics of the movie they were creating. Personal aesthetic interests or values is an intuitive justification for why the character is designed the way he is, but there are certainly more nuanced frameworks to consider.

Likewise, the second reason that Otis may be designed this way considers the overall purpose of the film. The film is a comedy, of course, and having a male cow with lactating udders is certainly something that young children could find amusing.  Here, we see a design choice to ignore reality for the purpose of a punchline. Otis’ internal consistency is compromised in pursuit of a more effective artwork in large, and this is a choice we see frequently in cartoons, where characters are deformed, distorted, or exploded for the sake of a punchline. Thus, this argument aligns best with the genre conventions that contextualize Barnyard.

However, the third major possibility deviates widely from the previous two. The final argument frequently seen in this (oddly heated) space of debate is the concept of Otis as a trans character. We see proponents of this theory bring up small pieces of the story and character interactions to support their theory, and it indeed holds some credibility [the ‘sister’ scene: https://twitter.com/keltbh/status/1071880655024349185%5D. This theory is particularly interesting in that it places this children’s movie as a profound example of how design choices can reveal subtleties of characters, and create deeper meanings within an artistic work. Here, the character designers choice was not only that of intentional social progress, but also of defiance. If indeed this theory is true, then Otis is the first trans character to ever appear in a children’s movie, and in a movie with morals of accepting who you are and finding yourself, at that 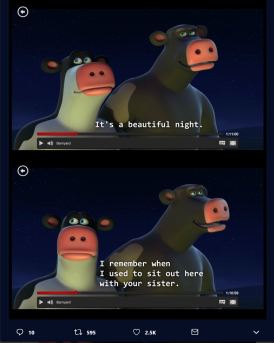 Thus, by viewing this peculiar choice by Dreamworks and Nickelodeon to give a male cow udders, we can begin to understand (udderstand) the reaons character design choices might be made: for aesthetics or convenience, to deliver an emotional effect, or to reveal more about the character or the piece as a whole.